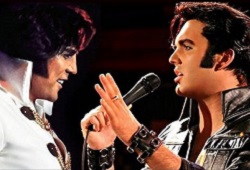 Date/Time(s):
POSTPONED – SHOW IS BEING RESCHEDULED

The Ultimate Elvis Tribute Artists – previously scheduled for Saturday, March 20, 2021 – is now being rescheduled due to the novel coronavirus pandemic. All tickets from the originally-scheduled show will be honored by the Virginia Theatre on the new date, once announced. This includes tickets currently on hold at WILL CALL, print-at-home tickets, and also original printed tickets.

Any patron unable to attend the new rescheduled date may request a full refund by emailing or by calling 217/356-9063.

Born and raised in the small coal-mining town of Pittston, Pennsylvania, Shawn’s love for music led him to begin imitating his musical idol, Elvis Presley. Each January he stars in the “Elvis Tribute Artist Spectacular Birthday Edition Tour.”, an extravaganza with Elvis’ own musicians, singers, and friends, in major venues in multiple cities.

The world was stunned almost 44 years ago on August 16, 1977 when ‘The King of Rock n’ Roll’ Elvis Presley passed away at his home in Graceland. For so many of his fans around the world, who had never heard, or seen, him perform live, this was their day the music died. For them he was larger than life but his memory lives on in his music, and the adoration of his fans has never diminished. It has in fact grown and he is as relevant today as he was 43 years ago.

Now is your chance to experience what it might have been like to see and hear Elvis perform live on stage and at the same time honor the greatest entertainer the world of rock n roll has ever known. Come celebrate the music, life and legacy of Elvis Presley, with an Unforgettable Evening Starring Elvis Presley Enterprises’ Ultimate Elvis Tribute Artists Shawn Klush and Cody Slaughter, featuring the Fabulous Ambassadors with Special Guests direct from Nashville Tennessee Thea and Donna Danos, The Nashville Dreams on backup vocals.

Shawn is the closest that anyone will ever get to the real King, he is pure class, the total package with all of the mannerisms, sense of humor, looks, facial expressions, movements and voice all executed to perfection of the King himself embodying the showmanship quality that electrifies audiences. A must see for any Elvis fan and it doesn’t get any better.

Shawn Klush is the world’s most successful Elvis tribute artist of all time.

Shawn has record breaking performances worldwide including in the US, Switzerland, Canada Australia, United Kingdom, Germany and South America. He was named “Worldwide Ambassador of Elvis” at the Las Vegas Hilton where he headlines the annual the Las Vegas Elvis Fest, celebrating Elvis’ historic Las Vegas Performances.

Shawn has released 5 CDs. He has performed with Elvis’ closest friends, musicians and singers such as JD Sumner and the Stamps Quartet, The Jordanaires, The Imperials, DJ Fontana, Charlie Hodge, Jerry Scheff, The Sweet Inspirations, Joe Guercio, Jerry Schilling and Joe Esposito. He portrayed Elvis in the hit TV miniseries “Shake, Rattle and Roll” which aired on CBS and VH1.

Cody Ray Slaughter: has been tagged as one of the most talented young Actors, Singers and Recording Artists in the country. Born and raised in Harrison, Arkansas, gateway to the beautiful Ozark Mountains, Cody began entertaining at the young age of 13. Being a true Southern boy, his passion for Elvis’ music and his uncanny resemblance to the King of Rock N roll, has directed his career path.

Performing the early years of the King, Cody has performed throughout the USA, across Canada, the UK and Australia. His uncanny portrayal of Elvis Presley exhibits his amazing love for who he calls, “the greatest entertainer of all time”.

Among some of Cody’s most exciting accolades were winning The People’s Choice Award during Elvis Week 2008. In July of 2011 at the Las Vegas Elvis Fest, Cody received The New Horizon Award for best new Elvis Tribute Artist. The award was given on the same stage where Elvis made history at the Las Vegas Hilton.

Representing Tupelo, Mississippi (Home of Elvis’ Birthplace) Cody was the youngest man ever to be named the Ultimate Elvis Tribute Artist by Elvis Presley Enterprises’.

Cody Ray Slaughter, the talented actor and singing sensation, has the raw talent and passion that Elvis himself exhibited when he first started. Excited fans have crowned Cody the new ‘Prince of Rock and Roll’.

Don’t miss this family friendly opportunity to see Elvis as you’ve never seen him before and introduce the wonderful music of the King to your children, grandchildren and friends. This magnificent production will astound and delight family members of all ages and leave you believing the King never left the building.

Share the gift of Elvis’ music with fans young and old and to reintroduce the music, magic and memories of the greatest entertainer of all time to new generations in the hope that audiences can experience what it may have been like to see Elvis in Concert at his best.

You will leave the show wondering has the King been reborn…..

A portion of the proceeds will benefit the DSC – Developmental Services Center of Champaign Illinois.