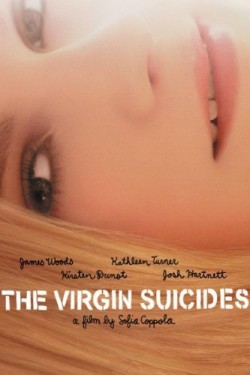 (97 min) Based on the 1993 best selling debut novel of the same name by American author Jeffrey Eugenides, the film tells of the brief lives of five teenage sisters in a middle class suburb near the outskirts of Detroit during the 1970s. After the youngest sister makes an initial attempt at suicide, her sisters are put under close scrutiny by their parents, eventually being confined to the household, which leads to their increasingly depressive and isolated behavior.  Written and directed by Sofia Coppola, produced by her father Francis Ford Coppola, starring James Woods, Kathleen Turner, Kirsten Dunst, Josh Hartnett, and A. J. Cook