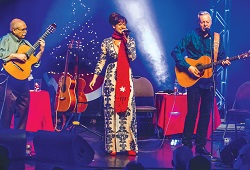 One of the greatest players on the planet – Chet Atkins

Tommy Emmanuel easily skates between musical styles, playing with the blues in one number, infusing Spanish tradition effortlessly into another, and thoughtfully exploring folk in a third. An accomplished fingerstyle player, Tommy frequently threads three different parts simultaneously into his material, operating as a one-man band who handles the melody, the supporting chords, and the bass all at once.

His technical gifts have earned him multiple awards and made him a Member of the Order of Australia, an honor bestowed by the Queen in his native homeland. Given his first guitar at age four, Tommy Emmanuel started working professionally just two years later in a family band. “When I was on stage, people lit up,” he recalls. He pursued music with a passion, working continuously in a variety of bands through his school years, and later, in one of Australia’s best-known acts, Dragon. He supplemented that work as a studio musician, playing on albums for artists like Air Supply and Men At Work.