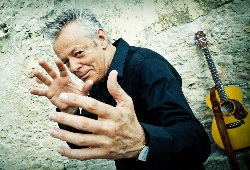 “I hesitate to refer to Tommy Emmanuel simply as a guitar player, because he is unquestionably one of the most gifted artists of our time.” – Acoustic Guitar Magazine

As a child prodigy during the 1960s, Tommy and his brother Phil formed their own bands. Tommy commenced his session career during the 1970s; some of his most notable appearances were on the Air Supply hit singles ‘Lost in Love’, ‘All Out of Love’, ‘Every Woman in the World’ and ‘Now and Forever’. Tommy’s presence was felt in the USA when his album ‘Midnight Drive’ was in the top 5 for 16 weeks, which made him the ‘most added artist’ on the radio charts in 1997.

In Nashville in 1999, Tommy was honoured by his mentor, Chet Atkins, receiving the Certified Guitar Player (CGP) award, for his contribution to finger style guitar – it was a crowning moment for the ‘Kid from Down Under.’

His versatility has taken Tommy from international Jazz Festivals to special events at The Sydney Opera House, The Grand Ole Opry in Nashville, performing for the King of Thailand and the Australian Prime Minister and going to remote areas in Peru and Africa to name a few. Throughout his career, Tommy has toured and worked with Sir George Martin, Stevie Wonder, Eric Clapton, Chet Atkins, Jerry Reed, and many, many others.