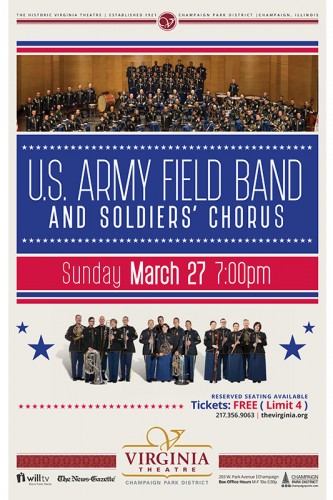 PLEASE NOTE:  some postcards were printed with the wrong date for this show. Sunday, March 27 is correct date

Tickets: FREE – you must have a ticket

The U.S. Army Field Band and Soldiers’ Chorus is the oldest and largest of The U.S. Army Field Band’s performing components. Founded in 1946 and 1957 respectively, these two ensembles combine to present joint concerts on their national tours. They have performed in all 50 states and 30 foreign countries for audiences totaling hundreds of millions.

The 65-member Concert Band and 29-member Soldiers’ Chorus perform regularly in some of the most famous concert halls in the world, and just as often in the humblest auditoriums in the smallest of communities. The joining of these two ensembles allows them to offer unparalleled versatility of programming, ranging from orchestral masterworks and operatic arias to Sousa marches, jazz classics, and Broadway musicals.