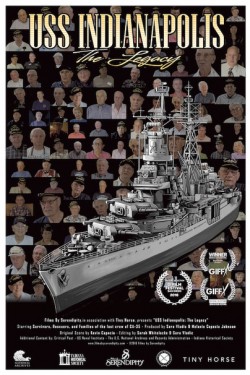 (98 min)  Experience this groundbreaking film, the story of the greatest sea disaster in U.S. Navy History, told for the first time by only the men who lived it.

In the most top secret Navy mission of World War II, the crew of the heavy cruiser USS Indianapolis delivers components of the atomic bomb to Tinian island. Four days later, two Japanese torpedoes sink the ship in the Challenger Deep, triggering an epic tale of survival. For five days, the 880 men who make it into the water battle searing sun, thirst, hundreds of sharks—and ultimately each other. Just 317 survive—only to band together again in a fifty-year fight to clear their captain’s name.

Set to a soaring original score, this incredible story unfolds with rare WWII footage, previously unpublished photographs, and new footage from one of the last WWII-era heavy cruisers still afloat. USS Indianapolis: The Legacy shows us that through courage and faith, ordinary men can survive the crucible of nature, and emerge extraordinary heroes.