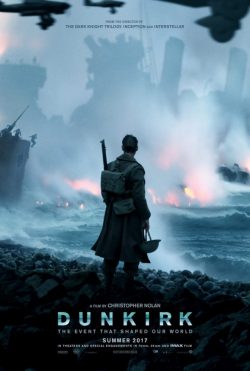 Parking Notice:
Joining us at the Virginia for Dunkirk this weekend?

Don’t forget, The Taste of Champaign-Urbana is Fri-Sat (Aug 18-19) in West Side Park, so make sure to leave a little earlier, due to the increased parking need in downtown Champaign this weekend. And, after the show, don’t miss your chance to walk over to West Side (one block west of the Virginia) to enjoy the premier outdoor event of the summer!

Parking is available in metered spaces on the streets surrounding the theatre and in the Hill Street Parking Deck, one block north, on Randolph. (The Hill Street Deck is probably your best bet this weekend.) Also, after 6pm on Friday and all day Sat/Sun, the lots at both Busey Bank and Hickory Point Bank are available free of charge.

Please note that State Street between Church and University will be blocked for Taste Fri-Sat.

Dunkirk
(120 min) From the director of The Dark Knight Trilogy, Interstellar, Memento, and Inception.

Shot on location in France, Christopher Nolan’s new film tells the gripping true story of the tragic WWII battle where 400,000 British and allied soldiers were evacuated from the beaches and harbor of Dunkirk. Nolan avoided computer-generated effects, instead using reconditioned war planes and ships from the period. Dunkirk was shot in large format, and the Virginia Theatre is one of only a handful of theatres nationwide screening the picture in 70mm.

Presented by the Champaign Park District.

How faithful is the film Dunkirk to the actual events that transpired on the beaches of France in May of 1940? What circumstances led up to the evacuation, and what were its ultimate impacts?

History professor John A. Lynn II will give a talk from the stage of the Virginia Theatre immediately following the 1:00 P.M. Sunday, August 20, screening of Dunkirk, taking questions from the audience. Admittance is included in the price of the movie ticket.

John A. Lynn II
John Lynn is Professor Emeritus of History and Political Science at the University of Illinois Urbana-Champaign. He was previously a Distinguished Professor of Military History at Northwestern University, from 2009-2012. He served as President of the United States Commission on Military History from 2003-2007 and Vice-President for the Society for Military History, 2005-2007.

In 2017, Lynn received both the Samuel Eliot Morison Prize from The Society for Military History and a Public Scholar Grant from the National Endowment for the Humanities.