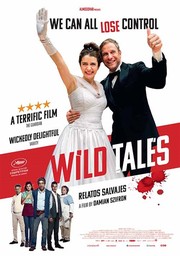 (2014) A multistory film from Argentina that would appear to live up to its title. It was nominated for a 2015 Oscar for best foreign-language film, and won last year’s Academy Award for best film in Argentina. Its six stories are united by a “mordant black humor” and a common theme of deadly revenge and retribution, and the whole is “relentlessly clever and entertaining,” said film critic Godfrey Cheshire. “Each segment sets up expectations that its successor ingeniously fulfills or surpasses.”