What a Season 2015-2016 turned out to be! With comedians Bill Maher and Paula Poundstone, concerts from the likes of REO Speedwagon, Celtic Woman, and Melissa Etheridge, live theatre by The Million Dollar Quartet, evenings with Jack Hanna and the women of That’s What She Said, along with dozens of classic films, dance recitals, Ebertfest, seven different youth theatrical productions (both touring & local) — it was a year to remember! We can’t wait to announce what 2016-2017 will bring.. but must! Until July 8th at least..

On July 8, the Champaign Park District will announce the Virginia’s new Season, to include performances by the legendary Ricky Skaggs, comedian Nick Offerman, Under the Streetlamp (featuring cast members of Broadway sensation Jersey Boys), NPR’s The Moth Radio Hour, and more. Sign up for the Virginia Theatre’s email newsletter and follow the Facebook event page to be among the first to receive the full listing! 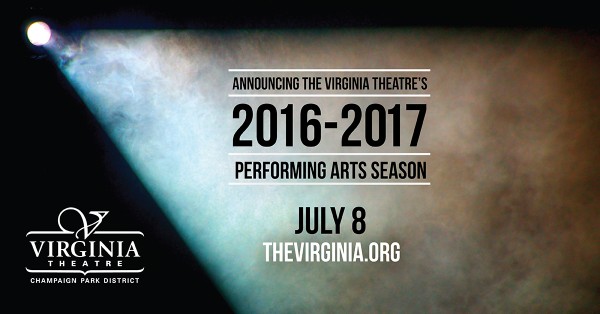 Plan ahead for a SERIES SUBSCRIPTION. The Champaign Park District is proud to again offer Virginia Theatre patrons a flexible Season Subscription option in 2016-2017, with a specially-curated listing of events to choose from! Season Subscriptions are available beginning July 22 (renewals available July 13) by calling 217-356-9063 or visiting the Virginia Theatre Box Office. Pick just four or more “VT Series” events and you’ll receive all the benefits of subscribing:

• Ticket discounts
• First choice of seats
• Option to keep your same seats if you renew your subscription next year
• Invitation to our VIP Subscribers Party at the Virginia Theatre
• First choice of seats to selected shows as they are added throughout the year (examples of added shows include Beach Boys, Melissa Etheridge, Mavis Staples)
• Free News-Gazette and Reel Deal movies all year long for patrons subscribing to six or more “VT Series” events