Ebertfest is Back with Slate of Dynamic Directors

Champaign-Urbana, IL – Ebertfest will be held April 20-23 at the Virginia Theatre in downtown Champaign, with related talks and panel discussions at the Hyatt Place in Champaign and at the University of Illinois Urbana-Champaign. The festival is a College of Media event. Photo by Fred Zwicky.

The 22nd Annual Roger Ebert’s Film Festival, co-founded and hosted by Chaz Ebert and also known as “Ebertfest,” announced that director Guillermo del Toro will return to the festival in April alongside screenwriter Kim Morgan with a black-and-white, 35mm version of their Oscar-nominated movie “Nightmare Alley.” Director Terry Zwigoff also will attend with his cult classic film “Ghost World.” 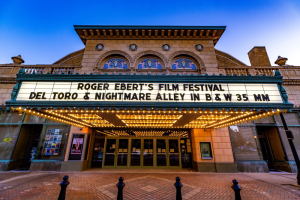 Announced last year prior to the festival’s rescheduling to 2022, directors Azazel Jacobs and Ramin Bahrani are also in the Ebertfest lineup. Jacobs will appear with the movie “French Exit” and Bahrani with “The White Tiger” – both recent critically acclaimed movies that audiences did not get to watch on the big screen during the pandemic.

Best known for his Academy Award-winning fantasy films “Pan’s Labyrinth” in 2006 and “The Shape of Water” in 2017, del Toro is considered among the most creative and visionary artists of his generation, with a distinctive style showcased through his work as a filmmaker, screenwriter, producer and author. “The Shape of Water” earned the Oscars for best director and best picture.

“Del Toro is a director with a genuine visual sense, with a way of drawing us into his story and evoking the mood with the very look and texture of his shots,” Roger Ebert once wrote. The director appeared at Ebertfest in 2016.

Recalling his last visit to Ebertfest in 2006 with the movie “Bad Santa” (2003), Zwigoff said the festival and Roger Ebert’s legacy are important for filmmakers. “Roger was a very wise and enlightened guy,” Zwigoff said. “If the film was a good one, he didn’t care who was in it, or what the budget was, or who made it. If it was good, he embraced it.”

Festival co-founder and host Chaz Ebert, the wife of Roger Ebert – an Urbana native and University of Illinois Urbana-Champaign alumnus who gained a wide following as a film critic until his death in 2013 – said she is excited by the return to an in-person festival this year.

“Watching movies during quarantine and then again afterward reinforced for me how totally different it is to watch movies in the cinema,” she said. “There are some movies that you don’t want to watch on a little screen unless you have to and, even if you have streamed some of these movies, you are going to get a very different experience seeing them at the festival.

“This is certainly the case for ‘Nightmare Alley,’ where we’ll screen the black-and-white version that represents the filmmakers’ original vision for the film.”

Ebertfest organizers aim for variety in its programming by curating a mix of small gems, independent films and classics – old and new – as well as blending musical performances into the schedule. 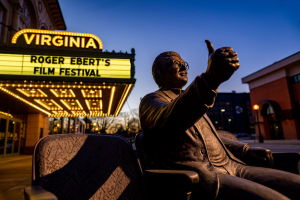 The alt-country band Clem Snide will open the 2022 festival, and musical presentations will be part of other Ebertfest movies this year. A silent movie screening of “Siren of the Tropics,” starring Josephine Baker, will be accompanied by 10 musicians from Renee Baker’s Chicago Modern Orchestra. In addition, the festival will follow other movies on the schedule with live musical performances that will be announced shortly.

Ebertfest will also feature an “audience choice” movie, the Alfred Hitchcock film “The 39 Steps.” Among Roger Ebert’s all-time favorite movies, the 1935 British film is an early work that puts on display all of the style elements that Hitchcock is known for.

The festival will announce more films and filmmaker guests in the next few weeks.

Ebertfest will be held April 20-23 at the Virginia Theatre in downtown Champaign, with related talks and panel discussions at the Hyatt Place in Champaign and at the University of Illinois Urbana-Champaign.

Passes are available for purchase at $200, including all processing fees. Four passes purchased together are $700. Also available are a small number of University of Illinois student passes priced at $150 each. Passes may be purchased through the festival website or at the Virginia Theatre box office, 203 W. Park Ave., Champaign, 217-356-9063. Updates will be posted on the festival website. Depending on available seating, tickets for individual movies may be available April 1.

Roger Ebert’s Film Festival is an event of the College of Media at the University of Illinois Urbana-Champaign. For additional information, visit http://www.ebertfest.com.

Anyone interested in supporting the event as a festival sponsor may contact Andy Hall, the festival’s project coordinator, at .