David Schroeder is the Director of Bands and Chorus at Bismarck-Henning Jr/Sr High School in Bismarck, Illinois, as well as Organist and Parish Music Director for Trinity Lutheran Church in Danville. 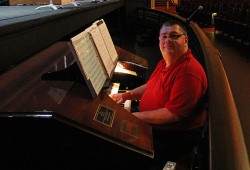 Mr. Schroeder received his Undergraduate degree in Comprehensive Music Education from the University of Illinois at Urbana-Champaign, where he was active as an organ student and played in the UIUC Symphonic Band and the Marching Illini. As an undergrad Music Ed. major, David’s principal instrument was the organ, which he had already been playing for 15 years in church.

Over a decade ago, David made his acquaintance with Warren York, house organist for Champaign’s historic Virginia Theatre, and traveled with Mr. York to a number of theatre organ concert’s around Illinois and Indiana.

David Schroeder is a long-standing member of the Central Illinois and Central Indiana chapters of the American Theatre Organ Society. He has always been a fan of the “theatre organ style” but thought that he was perhaps “too ingrained” in the style of hymns and classical organ literature to ever be able to play a theatre pipe organ. It was through Warren York’s encouragement and the opportunity to visit the Virginia with him where Warren would say, “Well, sit down and try the thing out!”  That’s all it took, and David was hooked.

Through further encouragement from Warren York, David went on to play pre-show concerts at the Headback Theatre, Indianapolis, and countless other live engagements.

Mr. Schroeder is delighted and thrilled to be welcomed to the Virginia and her “Mighty Wurlitzer”, and he hopes you enjoy hearing the music as much as he enjoys playing it for you!

Next post: VIRGINIA THEATRE SUSPENDS CONCESSIONS THROUGH THE END OF 2021