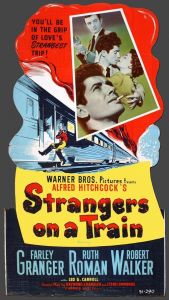 October 23 – Strangers On a Train (1951) PG
(101 min) A psychotic socialite confronts a pro tennis star with a theory on how two complete strangers can get away with murder – a theory that he plans to implement. 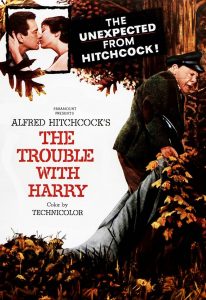 October 24 – The Trouble with Harry (1955) PG
(99 min) In an unusual game of whodunit, passerby have to figure out what really happened to the dead man they found in the woods, and who is responsible. Captain Albert Wiles stumbles across a well-dressed man in a meadow clearing in the hells above a small Vermont town. That man is dead, and Captain Wiles fears he accidentally shot this man, Harry, while he was hunting rabbits. Believing it would be the easiest way to handle the situation, Captain Wiles wants to hide the body rather than tell the authorities. However, while he is in the adjacent forest, he sees other people stumble across Harry, most of whom don’t seem to know him or notice that he’s dead. But one person sees Captain Wiles in the forest, and that person is spinster Ivy Gravely, who vows to keep the Captain’s secret about Harry. But other people who notice Harry become involved: a young, single mother, Jennifer Rogers, who is the one person who does seem to know Harry and seems happy that he’s dead. Then, there’s Sam Marlowe, a struggling artist to whom Captain Wiles tells the entire story of what he has seen thus far. Things quickly become complicated over the course of the day when the group tries to solve the mystery of who actually killed Harry. 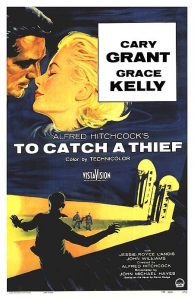 October 25 – To Catch a Thief (1955) PG
(106 min) Cary Grant stars as a jewel thief who faces arrest (again) along with his old partners in crime after a copycat burglar performs a heist and goes on the run. Pleading his innocence, Grant’s character vows to find out who’s been copying his distinctive style. 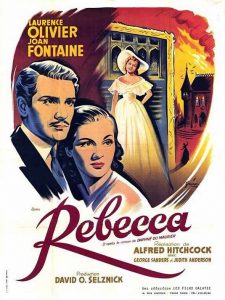 October 26 – Rebecca (1940) PG
(130 min) Newlywed bliss is quickly tarnished for shy and naïve bride, Mrs. de Winter. Upon arriving at her new husband’s estate, she quickly becomes tormented by the memory of his first wife, Rebecca —whose death is shrouded in mystery.

October 27 – Psycho (1960) R
(109 min) A Phoenix secretary, Marion Crane, is in for more than she bargained for when her plan to embezzle and flee without a trace fizzles once she checks into a remote motel, not fifteen miles from her destination. The motel is run by a friendly but lonely young man named Norman Bates, who lives with his unsound mother in the large, old house on the hill overlooking the motel. Marion finds out that it was mistake to choose this motel. The guiding force behind everyone’s distrust of showers, Psycho was and remains a true classic thriller.

Next post: NEWS-GAZETTE FILM SERIES: THE BEST CHRISTMAS MOVIES EVER